Situated outside Choszczno in the northwest corner of Poland in the county of West Pomerania, Modry Las Golf Club opened to world-wide acclaim in 2009. Designed by the legendary Gary Player, the course quickly became recognised as Poland’s most beautiful layout with Player describing it as “a classy golf course carved in a beautiful, natural landscape with mature pine forests, spring fed lakes and fields of wildflowers – just an incredible setting”.

How right he is. The course he designed is set in a landscape surrounded by two tranquil lakes ensuring water comes into play on most holes. It is a place of rare natural beauty with a memorable layout that includes deep, steep-faced bunkers and smooth-running greens.

Modry Las has established itself as one of the leading lights of golf in Central Europe providing both members and visitors with an unrivalled golfing experience. It was first selected by Golf World magazine (UK) in its top 100 European golf courses in 2009, just three months after its official opening. It has also been named Poland’s best golf course by the country’s leading golf website, www.polishgolf.pl.

In 2014, Germany’s Golf Journal magazine ranked Modry Las amongst the ‘Top 100 Golf Courses in Europe’ which combined courses from both the British Isles and continental Europe.

Surrounded by oak, pine and birch forests, Modry Las is challenging, scenic and still, and a remarkable place to play golf. 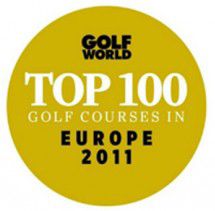